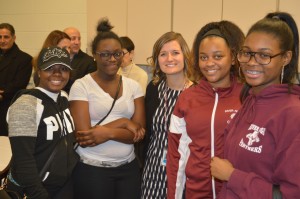 River Rouge high school was on the verge of failure. Once labeled a dropout factory, River Rouge has made huge strides and is now one of the United Way’s centers of excellence. Their addition of a school-based health center has further added to the revival of the community.

This health center signifies our rebirth… great things are happening in River Rouge.

Below you can see the story of River Rouge, along with excellent performances by their high school band and choir.

The district had fallen on extremely hard times… and without assistance from foundations from the United Way… primarily driven by the United Way… this district ceased to exist..and if you talk about what this district means to this community, lose the school district; the community loses its culture, its tradition, its history.

To open up a health center… in a community we talk about being a food desert… the lack of access to health care is funny… we want young people… regardless of whatever their circumstances are… come to school on a daily basis and act normal.

And normal by the definition given by Ruby Payne is that schools that set off a middle class values and beliefs… so we believe that young people who have no access to health care… who are not able to rest well, who don’t eat well… are going come to schools and function like normal students…so if you don’t provide them access and opportunity, you’re asking them to do the impossible.

It’s funny… we expect kids to be able to do what adults don’t do.. .and we condemn them for not being to do something that is unnatural because they’re not conditioned for this.

(We) were talking student had all these responsibilities at home… they had to wake up at 5am to make sure their brothers and sisters (get to the bus stop)… (they) walked by a ton of abandoned homes…. everything they had to endure and then they walked into the school building and they were yelled at for not having a pencil.